Login required for downloading only 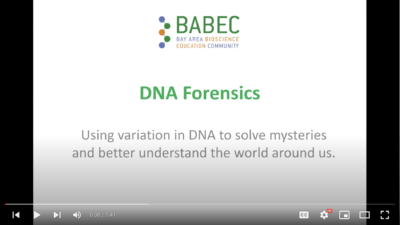 In this lesson, students explore DNA fingerprinting through the true case of Darvin Castro Santos, who was wrongfully convicted of robbery in 2012 and was exonerated in 2021, in part by newly analyzed DNA evidence. After learning about the work of the National Registry of Exonerations and the specifics of Darvin’s case, students use restriction digest and gel electrophoresis to determine whether or not Darvin’s DNA was at the crime scene. The resources for our previous lesson, “”The Case of the Missing Klay Thompson Jersey”” are available under ‘Resources’.

The online version of this lesson follows the Klay Thompson scenario and includes point of view videos for the lab portion. Students use sample results to write a claim about whose DNA was at the scene of the crime and support it with evidence and reasoning.

In order to access any Curriculum resource, please or sign up if you haven't already done so.

LS3.A – Inheritance of Traits
“…not all DNA codes for a protein…” The regions the restriction enzymes cut vary among individuals and typically do not code for a protein

LS3.B – Inheritance of Traits
“…distribution of traits on genetic and environmental factors”

In order to access any Curriculum resource, please or sign up if you haven't already done so.